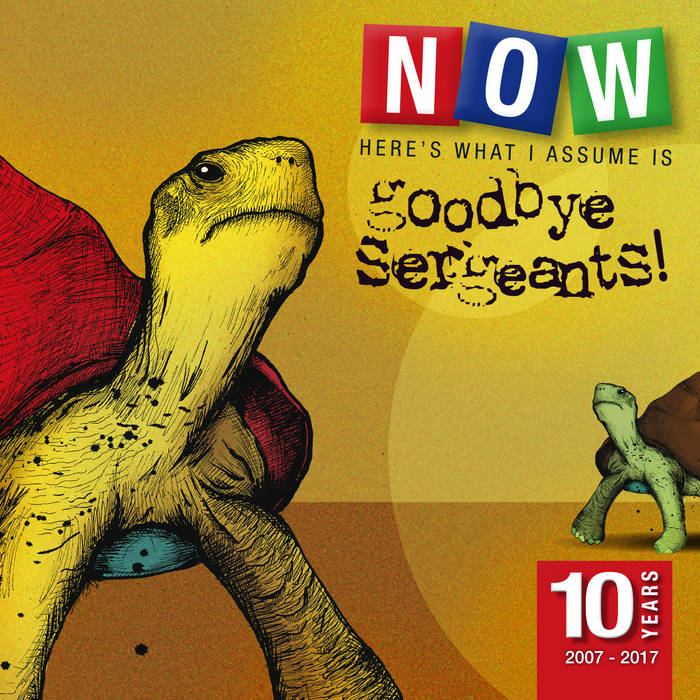 Goodbye Sergeants were Rich and Jon's previous band, active between 2005 and 2010. This double album is a compilation of the best tracks plus a load of previously unreleased and rare material to celebrate 10 years since the band's first "official" single release in 2007.

"Liner notes":
When enough people tell you you’re great there is a real danger you start to believe it. For a period between 2006 and 2007 I really thought we were going to be a massive band. Myspace was still a relatively new thing and had opened up this amazing new online world where you could easily connect with your fans and, most exciting of all, find new ones just using your computer. Although we would still be sending gig promoters CDs in the post at this stage, we’d spent the last few years getting used to MP3s and file sharing and although nobody seemed to know what this meant for the music industry, it meant that you could get people all over the world to hear your music and they could immediately tell you if they liked it and then tell their friends about you as well. We were starting to pick up fans all over the place, and a significant portion of these were in America. We had some of our early promo tracks played on the radio over there (as well as over here) and started receiving emails and voicemails from A&R reps from major and independent record labels, publishers, pluggers and promoters .They all wanted to know what our next move was and it was all very exciting. The official chart rules had recently changed so that digital-only singles (i.e. with no physical release) were now eligible, so in 2007 we decided to independently release a re-recording of our track “Boy Band Kind of Way”, which had attracted a lot of interest so far. We did a lot of promotion for the single, gigged all over, used social media fan base, but the single failed to make the impact we were hoping for. The truth is, we’d probably tried to run before we could walk, and had probably put too many eggs in that basket. Up until then we’d just been enjoying ourselves, doing our own thing and not taking ourselves too seriously. The huge pressure (probably a lot it directly coming from me) caused original guitarist Matt Haynes to quit in 2008.

My school friend Matt Jarman replaced him, however, and he gave the band an incredible creative kick up the arse with his contributions. Our EP of 2008, An Opuscule Worthy of a Monstrance (which he produced and mixed) is the best thing we ever did for sure, and I still think it sounds amazing. I really thought we were better than ever. However, despite this rebirth the follow up EP we recorded in 2009 was never fully released and we played our last gig together in 2010. I’d started to get in acting at this point as well as playing with other bands. I suppose you could say my lack of focus was a big part of the demise, but sometimes in a band you can just never quite put your finger on it. Matt J and I continued to play together in the Pistol Gang & The Preacher (on bass and drums this time), and Jon formed some other bands.

I tried to get things going again a few years later and arranged for us all to meet up in 2015 at Matt J’s studio (with Matt Haynes as well). We had a lovely time playing through all the stuff, and I wanted to record something or film something to draw a line under the band, but no reunion shows materialised, no-one else was really that interested and that was basically that.

So, 10 years on from the release of “Boy Band” this collection is a celebration of some of that work we did together: selections from the Opuscule EP, the Boy Band single, our Live at the Buffalo Bar EP, plus the three tracks from the abandoned EP, some early promo tracks and some rehearsal jams.

Jon and I are now recording music again as Rich Keeble & The More Accomplished Musicians, and we’ll probably play some old Goodbye Sergeants songs at future shows because I think that will be really fun. But for now…. Goodbye, Goodbye Sergeants.